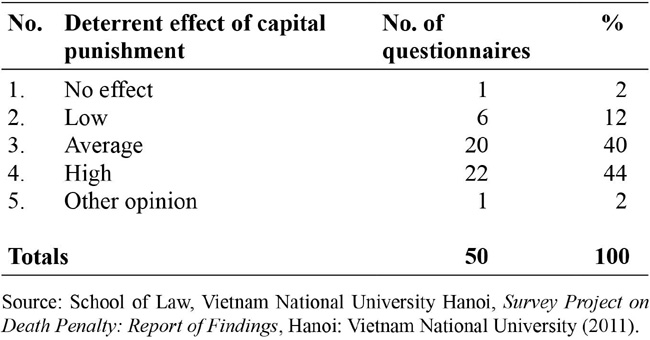 The Socialist Republic of Vietnam is among the countries which still retain both de jure and de facto capital punishment.

This chapter examines the current situation and perspective about capital punishment in Vietnam. The author will use different sources to demonstrate that, in recent decades, following the international general trend, the Government of Vietnam has amended the Penal Code several times in order to reduce the number of capital crimes. In addition, more and more citizens, including government officials and members of the academic community, support abolition or reduction of capital punishment.

A Brief History of Capital Punishment in Vietnam

Law in Vietnam historically comprised written law (ius scriptum) and unwritten law (ius non scriptum). It is difficult to determine when capital punishment has laid down in Vietnamese unwritten law, as available sources of relevant information are comparatively limited. However, as noted in some historical documents, capital punishment was applied in the Dinh (968–80) and Early Le Dynasties (969–79), including some extremely cruel forms such as throwing criminals into tigers’ and panthers’ cages or into boiling cauldrons of oil.

In the Le Dynasty (1418–1656), there existed a renowned code on both the national and global scale, Quoc Trieu Hinh luat (‘The National Penal Code’), or Bo luat Hong Duc (‘The Hong Duc Code’), written under order of King Le Thanh Tong (Hong Duc date), in 1483. It consists of six volumes, 13 chapters and 722 provisions. Although the code contains many truly humane provisions, it also stipulated regulations on capital punishment.

As regards the Nguyen Dynasty (1802–1945), there existed a significant code, Hoang Viet Luat le (‘The Gia Long Code’), written under order of King Gia Long in 1815. It consists of 22 volumes and 398 provisions. This can be considered the last code of the feudal regime in Vietnam, and similar to the previous codes, it stipulated certain regulations on capital punishment.

In general, all these feudal codes follow the system of five penalties, including (1) xuy (flogging), (2) truong (cudgel), (3) do (servitude), (4) luu (exile) and (5) tu (capital punishment). The category or system of crimes for which capital punishment was applied varied in different dynasties. However, in general, capital punishment could be applied to a large number of crimes, and certain types of crimes were laid down in all codes for which capital punishment applied. Those crimes included murder, high treason, receiving bribes and embezzling property. Many forms of capital punishment enforcement were found to be cruel or vilely revengeful, such as chu di tam toc (‘three exterminations’), slow slicing, mutilation, dismemberment, or quartering, applied in accordance with the principles of duc phat bat nhi bach (‘punishing a person to warn others’) or dung hinh ky vu vo hinh (‘stipulating the punishments so as not to be applied’).1

However, these Vietnamese feudal codes, especially the Hong Duc Code, also include regulations demonstrating the spirit of clemency and humanity towards criminals. Examples are regulations on pardon or commutation for those who plead guilty, or waiver, commutation or suspension of the penalty enforcement on women taking care of infants, or people with mental illness, or the elderly.

In the French colonial period (1858–1945), the system of written law promulgated by the French was applied separately to each of the three regions of Vietnam: Bac Ky (North Vietnam), Trung Ky (Central Vietnam) and Nam Ky (South Vietnam), in order to be appropriate to the political systems of each region. Among the legal texts drafted by the French during this period, there were a few providing for capital punishment, in particular the 1881 North Vietnam Penal Code (Hinh luat Bac Ky), dated 29 July 1891, the decree dated 2 June 1932, the decree dated 31 December 1937 and the decree dated 23 June 1941.2 There was a rather long list of crimes for which capital punishment was applied in this period, including murder and rebellion against the protectorate government. The main method of execution was the guillotine.

The August 1945 revolution founded the new country of Vietnam, which is independent from foreign colonial rule and adheres to a democratic republican system. The first legal texts creating the foundation for the judicial system of the nation were the series of Decrees no. 33 dated 13 September 1945 promulgated by President Ho Chi Minh, including Decree no. 33A allowing Ty liem phong (the Security Service Department) to arrest those who threatened the country’s democracy and send them into exile, Decree no. 33B setting up rules and procedures for the security service and police stations in arresting offenders, Decree no. 33C establishing military courts and Decree no. 33D stipulating regulations concerning the release of those who had been sentenced before August 19, 1945. Among these, Decree no. 33C provided that military courts had the jurisdiction to pronounce sentence and enforce sanctions imposed on those who carried out actions impairing the independence of the Democratic Republic of Vietnam (except for soldiers, to whom military law should be applied). The penalties varied, with capital punishment as the highest of all. Those who were sentenced to capital punishment could ask the President for commutation. Accordingly, capital punishment was specified from early on in the law of the new country of Vietnam.

Subsequent to these legal documents, during the period 1945–85, capital punishment was specified in various other documents of the state of Vietnam in the forms of decrees, laws, ordinances and circulars. In researching those documents, one can draw the following conclusions:

2. Capital punishment was reserved mainly for crimes against national security, such as spying, rebellion, infringing upon territorial security, conducting banditry activities, defecting to the enemy or pursuing counter-revolutionary ideas then fleeing from the country, murder, intentionally inflicting injury on or causing harm to the health of other persons, detaining persons, threatening to murder for counter-revolutionary purposes, destroying, opposing or destroying the implementation of state policies, and so on. Capital punishment was not clearly distinguished from administrative sanctions.

The 1985 Penal Code, the first ever criminal code and the first legal document to be codified of the Socialist Republic of Vietnam, was passed by the National Assembly on 27 June 1985 and entered into force on 1 January 1986. It comprised 20 chapters and 280 provisions. The adoption of the Penal Code was a great landmark in the development of Vietnam’s criminal law.

With regard to capital punishment, Article 27 of the 1985 Penal Code provided:

In cases where persons sentenced to death enjoy commutation, the capital punishment shall be converted into life imprisonment.

In the extraordinary case stipulated in a specific law, the execution may be carried out immediately following the trial.

• In 1989, the first amendment added four capital crimes concerning narcotics in Article 96(a).

• In 1991, the second amendment added another three capital crimes relating to infringement of property rights.

• In 1992, the third amendment added the capital crime of illegal cross-border transportation of goods and/or currencies (Article 97).

• In 1997, the fourth amendment added another six capital crimes.

Accordingly, after four amendments, the 1985 Penal Code now specified 44 capital crimes, accounting for 20.5 per cent of the total of 216 provisions. Such an expansion reflected the increasingly strict policy of law and order in Vietnam during the period 1985–97.

The 1999 Penal Code was passed by the National Assembly of the Socialist Republic of Vietnam on 12 December 1999, replacing the 1985 Penal Code. The 1999 Penal Code comprised 24 chapters and 267 provisions, amongst which were 29 articles stipulating capital punishment, which accounted for 11 per cent of the total articles on crimes.

Capital punishment shall not apply to juvenile offenders, pregnant women and women nursing children under 36 months old at the time of committing crimes or being tried.

In cases where persons sentenced to death enjoy commutation, the punishment shall be converted into life imprisonment.

Comparing the capital crimes in the 1985 Penal Code with the 1999 Penal Code, one can see the following.

First, with regard to definition, the forms of capital punishment’s definition provided in the 1985 Penal Code and 1999 Penal Code are similar. However, regarding the content of the articles, there are significant differences, as shown in Table 17.3 (see p. 368)