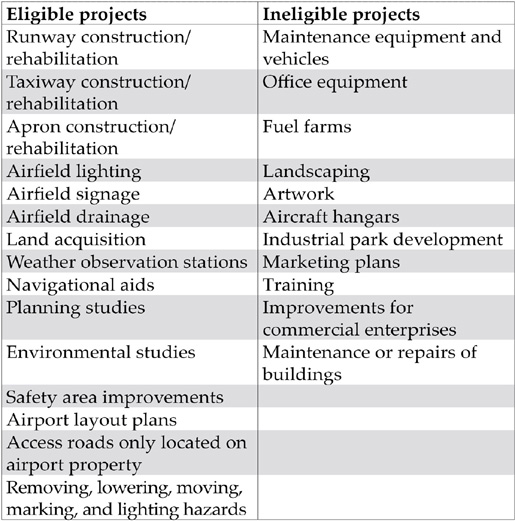 Calling O’Hare an airport is like calling the Queen Elizabeth II a boat.

After reading this chapter, you should:

1. understand how the DOT evaluates the reasonableness of proposed airport fees;

2. know the limitations imposed by the Anti-Head Tax Act on the ability of airports to collect fees and taxes;

3. understand the process that an airport must follow before the FAA will authorize it to collect passenger fees under the Passenger Facility Charge Program;

4. have a basic idea of how the FAA’s Airport and Airway Trust Fund generates revenue and how that revenue is spent;

5. understand the eligibility requirements to obtain funding for a project under the AIP;

6. be familiar with the grant assurances that airports must agree to when accepting federal grants from the FAA.

The Anti-Head Tax Act was passed in 1996. The Act regulates both the type and the amount of fees that an airport may charge air carriers. The act contains several restrictions on the types of fees that may be charged to air carriers. It prohibits taxes or fees from being assessed against:

• a passenger engaging in air travel;

• the act of transporting a passenger in air travel;

• the sale of air transportation; and

The Act also prohibits the states from collecting any fee from aircraft that fly over the state without landing or taking off. In other words, a fee may only be assessed against aircraft that actually land or take off within the physical jurisdiction of the taxing authority.

Airports are permitted to assess property taxes, net income taxes, franchise taxes, and taxes for the sale of goods or services. They may also assess rental charges, landing fees, and other service charges for the use of airport facilities. But the DOT is empowered to regulate these fees to ensure they are reasonable and non-discriminatory. A fee is considered reasonable if it: (1) is based on some fair approximation of use of the facilities; (2) is not excessive in relation to the benefits conferred; and (3) does not discriminate against interstate commerce.

To assist airport operators in evaluating whether a proposed fee will meet with federal approval, the Federal Aviation Authorization Act requires the Secretary of Transportation to publish regulations “establishing … the standards or guidelines that shall be used by the Secretary in determining … whether an airport fee is reasonable.” The DOT issued its Policy Regarding Airport Rates and Charges in 1996, and it published an amendment to that policy in 2008. Under the current policy, the DOT will not entertain a complaint about the reasonableness of a fee if: (1) the fee was set by agreement; and (2) the dispute is filed by a party to that agreement. In other words, if an air carrier enters into a contract to pay a certain fee, it is prevented from seeking Department intervention on the basis of the fee’s alleged unreasonableness.

When determining whether a fee is reasonable, the Department considers the following factors, among others:

• the fees charged by other similarly situated airports;

• whether or not the fee results in unjust discrimination against an air carrier;

• the airport’s need to be financially self-sufficient;

• whether or not the airport uses a consistent methodology for assessing fees.

The 2008 Amendments implemented congestion pricing, which authorizes airports to charge higher fees during peak hours. By implementing this policy, the Department intended to reduce peak-hour congestion. The Department assumed that airlines would spread departures and arrivals throughout the day in order to take advantage of lower off-peak landing fees. Instead, a coalition of airlines filed suit to block the regulation.

FACTS: In order to reduce congestion at major airports, the DOT amended its Policy Regarding Airport Rates and Charges. The 2008 Amendments allow an airport to charge aircraft higher landing fees at peak times, a practice known as congestion pricing. The Air Transport Association of America, on behalf of several US airlines, petitioned for review of the Amendments, arguing that they allowed airports to charge unreasonable and discriminatory fees.

In the 12 years between the promulgation of the 1996 Policy and of the 2008 Amendments, the number of landings by airlines in the US increased by more than 25 percent, from 8.2 million per year to 10.3 million. This increase in traffic led to longer and more frequent delays. The Joint Economic Committee of Congress found that “flight arrivals were delayed by a total of 4.3 million hours” in 2007 alone. One of the causes of flight delays is excess demand for runways during peak hours. In an ordinary market, supply and price adjust to eliminate excess demand, but airports are no ordinary market. Airports cannot readily increase the supply of landing slots because building more runways takes years and, at some airports, it is not feasible at all. Prior to the 2008 amendments, airports were also barred from adjusting landing fees to correspond with the fluctuating demand levels.

If an airport wants to reduce congestion, then it must eliminate the excess demand by reducing the number of aircraft that airlines, cargo operators, and general aviation want to land during peak periods. In order to do so, it must have some method of allocating the scarce resource of landing rights. Congestion pricing accomplishes this by increasing the price. If the fee is high enough, then a system user will adjust its schedule by shifting a flight to a less congested time or an alternate airport, using fewer but larger aircraft, or simply canceling some flights.

REASONING: A fee is reasonable if it: (1) is based on some fair approximation of use of the facilities; (2) is not excessive in relation to the benefits conferred; and (3) does not discriminate against interstate commerce. When deciding whether an administrative agency’s regulations are proper, the courts give substantial deference to the federal agency.

An aircraft that lands at a congested time imposes a significant cost, in the form of delay, both upon other airlines that want to land aircraft at the same time and upon the passengers aboard those aircraft. Each additional aircraft seeking to land at that time adds to the congestion and imposes additional delays upon other users of the system. Meanwhile, the user that successfully lands an aircraft at the peak time reaps a substantial benefit because it is able to offer a valuable service to its customers. As long as the costs to the user landing the aircraft during a peak hour are less than the benefits to that particular user, it will land the aircraft even if the total social costs – including delays to other users of the system – exceed the total social benefits.

It is entirely reasonable to expect an airline, and in turn its passengers, to pay a premium for the opportunity to arrive at a peak time. Therefore, depending upon the actual amount of the fee, it may well be reasonable.

The Air Transportation Association also argued that peak-hour pricing is unjustly discriminatory because airlines landing during peak hours are forced to pay higher landing fees than similarly situated airlines that arrive during off-peak hours. Yet, each aircraft that lands at a particular airport during a particular hour will be subject to the same fee. Although landing fees will vary from one airport to another and from one hour to another, the difference in pricing is justified.

Periodic congestion remains a significant problem at airports across the country. At the 30 busiest airports in the National Airspace System, referred to by the FAA as simply “the core 30,” periods of compacted demand are often exacerbated by small cargo aircraft colloquially referred to in the industry as “box haulers.” These aircraft are typically single-engine or small twin-engine aircraft that feed a larger wide-body cargo jet such as a FedEx or UPS jet. It is not uncommon for 10–15 of these smaller box hauler-type aircraft to feed a single jet and be scheduled to land within 30 minutes of each other, within what are already-existing peak demand hours for air carrier operations.

As the case above demonstrates, the courts give substantial deference to an agency’s interpretation of its own regulations. Since the DOT interpreted its regulations to permit the implementation of on-peak pricing and since the new pricing structure was justified by the facts, the 2008 Amendments were upheld.

THE AIRPORT AND AIRWAY TRUST FUND

The Airport and Airway Trust Fund was established by the Airport and Airway Revenue Act of 1970. The purpose of the Trust Fund is to provide a steady source of income for the FAA that grows in step with the aviation system. As traffic increases, so does revenue. This is balanced by the fact that the FAA must dedicate more resources to maintain the safety of the national air transportation system as capacity increases. The AIP plays an integral part in this process.

The FAA has four budget accounts: the Facilities and Equipment account; the Researching, Engineering, and Development account; the AIP account; and the Operations account. The first three accounts are funded entirely by the Airport and Airways Trust Fund. The fourth account, Operations, also receives a significant portion of its revenue from the Trust Fund.

The Trust Fund generates revenue through excise taxes paid by users of the National Airspace System. Among other things, the excise taxes apply to:

The Trust Fund finances the FAA’s ability to provide grants to airports. Grants are not loans and, with limited exceptions, they do not have to be repaid. Grants provide funding for improvement projects, such as expansions, redesigns, modernization projects, noise abatement systems, navigational systems, environmental abatement projects, and other types of construction. The AIP is the program that administers the FAA’s grant process. It is funded entirely by the Airport and Airways Trust Fund, and it plays an integral part in increasing safety as well as the capacity of the national air transportation system.