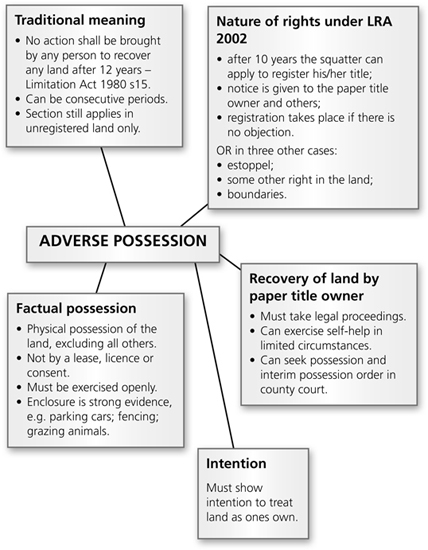 14.1 The Meaning of Adverse Possession

1.  Adverse possession is based on the principle that if a paper title owner fails to evict a squatter or trespasser from his land within a certain period his title to the land will be lost.

2.  The right of action starts to run when two elements are present:

squatters take possession of the land.

3.  Consecutive periods of adverse possession by different people may be added together (Mount Carmel Investments Ltd v Peter Thurlow Ltd (1988)), provided there is no break between these periods.

that they have taken factual possession of the land;

that they have the necessary intention or animus possidendi.

5.  Different procedures apply for unregistered and registered land but in both cases the squatter must prove factual possession and intention to possess.

1.  This involves physical possession of the land, which excludes all others including the paper title owner (Powell v Macfarlane (1977)).

3.  Adverse possession need not be hostile to the paper title owner.

4.  The factual possession of the land must be exercised openly and must not be concealed, to ensure that the paper title owner is given an opportunity to challenge the possession.

5.  Squatters must prove that they have physical control over the property (Bucks C.C. v Moran (1990)).

6.  ‘Enclosure is the strongest possible evidence of adverse possession’ – Cockburn CJ in Seddon v Smith (1877) (Bucks C.C. v Moran (1990) new lock and chain on the gate into the part of the land claimed by the squatter). Fencing is always good evidence of possession.

8.  What constitutes evidence of factual possession?

The erection of signs excluding trespassers (Powell v Macfarlane (1979) although no adverse possession was held in that case);

9.  Evidence of factual possession will vary according to the type of land.

14.3 The Intention to Possess

1.  The squatter must show that he intended to treat the land as his own.

3.  Generally, intent is inferred from acts and is not based on declarations from the squatter himself.

4.  Evidence from a squatter that he would have accepted a licence or lease from the owner it is not fatal to a claim for adverse possession if no lawful right was granted (Pye v Graham (2003)).

5.  The paper title owner cannot rely on the doctrine of implied licence (Limitation Act 1980 Sch 1). This doctrine suggested that the owners could impliedly reserve themselves the right to return to the land in the future without taking action to prevent the continued enjoyment of the property by the squatter.

6.  The fact that the squatter expects to be evicted at any time does not prevent him from having the intention to possess (Lambeth LBC v Blackburn (2001)).