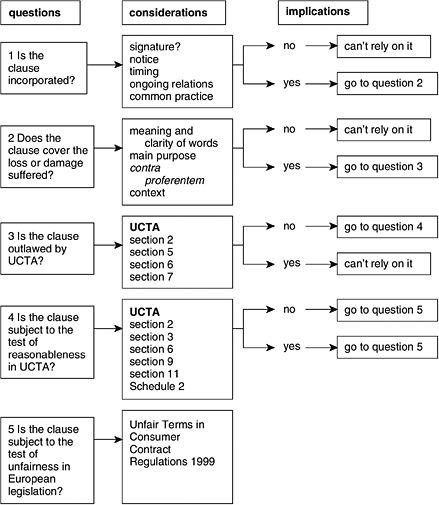 So far in this section of the book we have concentrated on the terms of a contract and how these reflect the obligations the parties owe to each other. This chapter shifts the focus to look at how the judiciary has dealt with certain types of unfair terms in contracts which seek to exclude or limit liability. As in other chapters, it is important to start by making it clear that different approaches to unfair bargains are apparent from case law, and these reflect different conceptions of the role of contract law and notions of what is fair and reasonable. Whilst the classical model of contract recognises that unfairness occurs, the focus is on procedural rather than substantive unfairness. This means that traditionalists have been willing in some circumstances to intervene to upset a contract which has been negotiated in an unfair way but not to regulate unfair exchanges. Even with the introduction of legislation and the development of doctrines to protect the parties against manifestly unfair contracts, it remains the case that contractual terms are not set aside lightly. The courts and legislature will only intervene to mitigate the effects of extreme behaviour. Atiyah (1979) has likened the approach to a contest or game in which there are rules to protect how it is played, to outlaw fouls and so on, but there is no scope for revisiting whether the outcome was fair.

This mixed approach has become more contentious since the time when the classical model first came to dominate the law of contract. Moreover, it could be argued that the courts have always found it hard to separate questions of unfair negotiations from unfair terms. The growth of welfarism within the law of contract has encouraged the courts and legislature to intervene to limit the autonomy of contracting parties where significant inequalities of bargaining power are reflected in contractual terms. This approach to the subject has been particularly evident in the field of consumer contracts where there has been recognition that the growth of large-scale businesses and standard form contracts means that consumers have no power to either negotiate the terms of the contract or suggest alterations. The courts and legislature have been particularly diligent in their approach to the regulation of exclusion and limitation clauses which tend to restrict liability rather than define positive obligations. In this chapter we will look at judicial activity in this field and in the next we will turn to look at what the legislature has done to mitigate the harshness of certain contractual terms.

The judicial role in the regulation of unfair exclusion and limitation clauses has been somewhat overshadowed by legislation in the field in recent years, but it remains important to understand it. Judicial precedent is particularly important on the question of whether an exclusion or limitation clause is part of the contract in the first place.

Figure 15.1 : Elements of a contract – what goes in, what comes out

Moreover, even with the advent of legislation in the field, the judiciary has an important role to play in interpreting the meaning of exclusion clauses, legislative provisions, and giving context to the circumstances in which the exclusion clause is being used. It is also the case that many contracts in the field of insurance, land, intellectual property and securities do not fall within the ambit of major statutes regulating exemption clauses such as the Unfair Contract Terms Act 1977. Furthermore, legislative intervention cannot be understood fully without reference to the case law as it was the judiciary who first showed themselves to be active in the field. In the remainder of this section we outline the various common law rules which they have developed in their attempts to police terms.

So far, in this book we have focused on determining the positive obligations of the parties to a contract. In this chapter we will look at the ways in which exemption clauses can be used to exclude or limit liability.

It can be seen from Figure 15.1 that there are two types of clause which are of interest in this context. Exemption clauses seek to exclude a particular type of liability, whereas limitation clauses merely seek to limit liability. Beale, Bishop and Furmston (2008) have identified a number of different types of clauses which fall under this heading and these have been reproduced in Box 15.1.

Limiting the compensation for a breach of contract

Limiting the time during which a remedy is available

Imposing a condition on obtaining a remedy

The clear purpose of an exclusion clause in a consumer transaction is to enable the business person to eliminate the risk of financial loss as a result of having to pay damages to the other party for breach. Consequently, exclusion and limitation clauses are common in business– consumer contracts. In commercial transactions where bargaining strength is more likely to be equal, exclusion clauses are less common, although limitation of liability clauses are often found. These apportion the risk of loss between the parties who can insure accordingly. In fact, in standard form dealings between business organisations, there is a general tendency towards a more sophisticated and wide-ranging concern with risk and its apportionment than is to be found in consumer transactions. The parties, through the use of settled, agreed devices, often display a willingness to be very specific about what they are undertaking and to avoid or minimise common ‘enemies’ including the risks of litigation. To this extent, contrary to the classical approach, their contracts emphasise common interests rather than ‘separation’ and conflict.

As we have already suggested, approaches to attempts by the parties to exempt liability have changed considerably. Seventy years ago, a Miss L’Estrange (see further L’Estrange v Graucob Ltd, 1934) bought a cigarette machine under a sales agreement which contained a clause which stated that ‘any express or implied condition, statement or warranty, statutory or otherwise not stated herein, is hereby excluded’. Although the machine soon jammed and became unworkable, she lost her action for breach because the clause was considered valid. This year, the author purchased a car under a sales agreement which stated that: ‘Nothing in these conditions is intended to remove, alter or restrict any rights or obligations of either party arising under the Sale of Goods legislation’. On the face of it, many of Miss L’Estrange’s expectations and remedies were removed by the exclusion clause. In the second transaction, the protection afforded by implied statutory obligations was apparently unimpaired. What is the explanation for this change? How has the common law approached the issue of unfair limitations and exclusions? How have they balanced the needs of autonomous individuals to make whatever deals they see fit with a desire to introduce more substantive notions of fairness?

Whenever faced with an exclusion or limitation clause, it is standard practice to divide analysis of it into five main questions. Firstly, is the clause which seeks to exclude or limit a party’s liability incorporated into the contract? Secondly, if so, as a matter of judicial construction, does the wording of the clause satisfactorily cover the loss or damage at issue? Thirdly, if it does, is it a clause which is rendered ineffective under the Unfair Contract Terms Act 1977? Fourthly, if it passes this test, does the clause satisfy the requirement of reasonableness? Finally, if the term is contained in a standard form contract, is it subject to the test of fairness in European regulations?

The first two questions are addressed in this chapter and, in the next chapter, we go on to consider the remaining issues. But before moving on, it is useful to summarise the various questions which you will need to ask when determining whether an exclusion clause is effective and the limitations which might be placed on it. There is no doubt that the law surrounding exclusion clauses is complex as it involves a web of different types of regulatory controls.